It’s International Dawn Chorus Day! To celebrate I recorded the birds in my back garden. This is at about 5.15am, a Robin and Blackbird duet.

The fields near my parents house in Sligo are full of Grasshoppers chirping. I’ve made a few recordings of them over the last week but this one definitely came out the clearest. I used a pair of mikroUši, tiny electret microphones that I could lay down in the grass. The Grasshoppers produce the sound by rasping the pegs on their hind legs against the veins running along their wing cases. The photograph is of a Grasshopper in my Dad’s hand.

Having been out to record the bats a few more times I’m now fairly certain these are Leisler’s Bats. This recording was taken a bit further upriver, opposite Atkins Hall (formerly St. Anne’s Asylum). The world sounds spooky at 1/5th speed. Best listened to on your own, in the dark, if you dare… 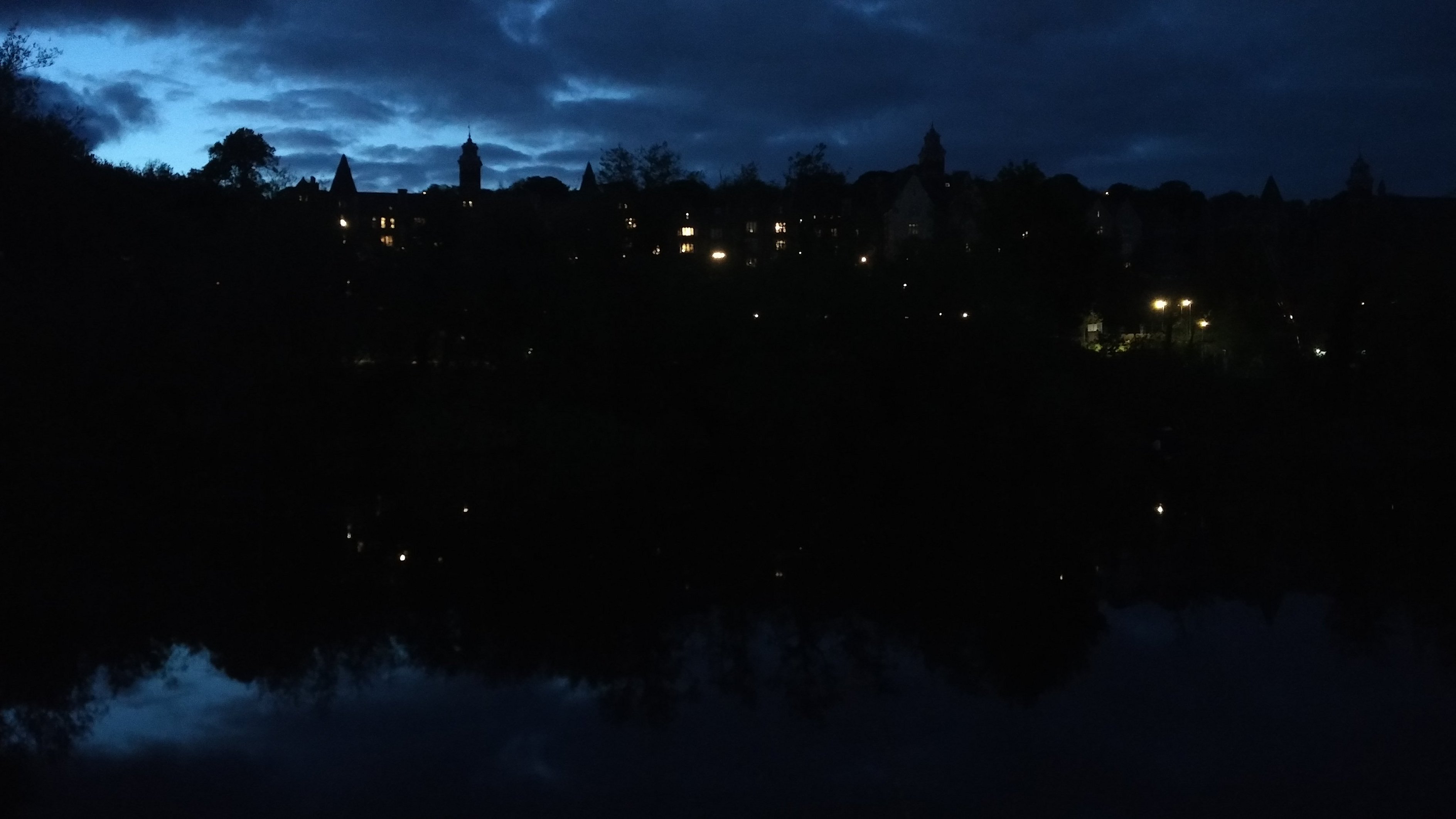 Recorded at 4.45am this morning, just off the path along the Curragheen River between Model Farm Road and the Lee Fields. I’ve been to the same spot a few times over the last couple of days and wanted to get a nice recording of the Song Thrush. I placed my microphone on a rock pointing towards the bird’s favourite perch at the top of a tall tree. It was dark and while I was fumbling about I missed the start of his song. You can also hear some revellers still out from the previous night, I think they’re quite musical too! As the dawn chorus progresses it gets pretty raucous with plenty of crows, and also blackbirds, robins and wrens. The recording fades out just before the point where my recorder’s batteries run out. The image is of the flowers on a Hawthorne tree nearby (taken a couple of days previously).

I’ve been doing a lot of field-recording during the lockdown, trying to get nicer recordings. I don’t really know what I’m going to do with them all. It’s just nice to be sitting outside listening, and exciting to cycle around looking for things to record! It seems an interesting idea to combine long form recordings like this one with an image taken in the area, to give a little window into the recording, and so combined they can work as an audio-visual background. I might try to get more images next time to paint a fuller picture (it’s not all picturesque, there’s also lots of cans and rubbish around, and places where people have been lighting fires).

The sound of a mother duck bringing her nine ducklings to feed in a puddle on the edge of the pond. I’d seen them use this puddle the previous day, so early in the morning I left my microphone there and waited for them to come along. Their cheeps, wing splashes, beak snaps and bloops, and the sounds the mother uses to talk to her chicks are all amazing. While they were feeding two hooded crows flew over (to try and catch a duckling for breakfast). Mother duck chased them away, and you can hear me running across to scare the crows too. 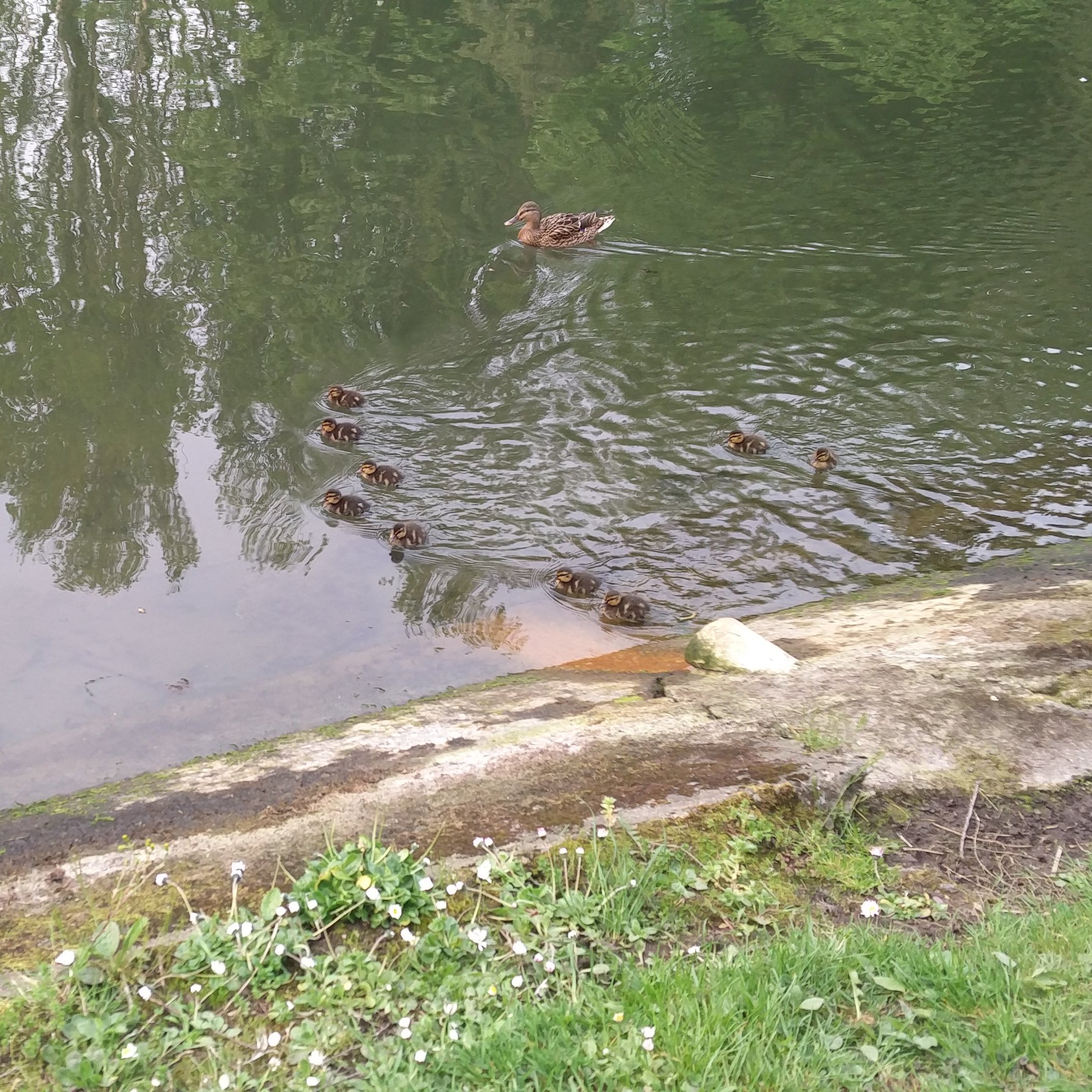 Yesterday evening I was cycling home along the river, behind the Kingsley Hotel, and the bats were out, so I decided to try recording them. I wasn’t sure if my microphone would pick them up. I couldn’t hear a thing while I recorded them. To my surprise it came out quite well!

The first section is played at 1/10th speed. You can really hear the way they’re using the sonar. The faster clicks are used when they’re honing in on an insect.

The second section is 1/4 pitch, but at normal speed, so it retains an accurate sense of movement.

I think these are Leisler Bats, but I’m not certain.